Posted on June 24, 2017 by merrimackriverlandfarm 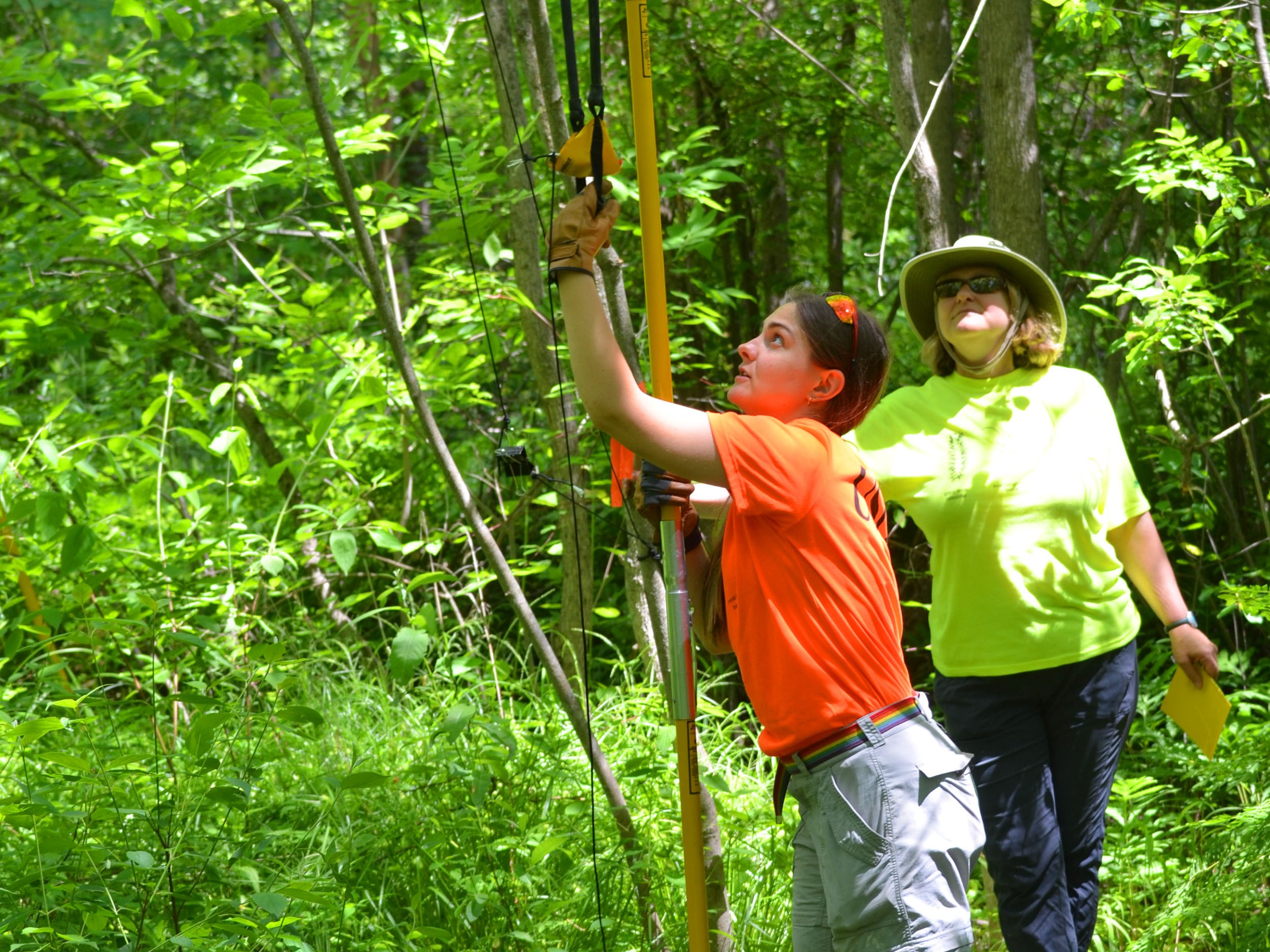 Canterbury, NH (June 22, 2017) — The Feds showed up at Riverland today, hard on the heels of a small, green bug that is killing the ash trees in the wetland at the foot of our sandy bank, along the path to the beach. Theresa Murphy and Marci Murray, from the American Plant Health Inspection Service (APHIS), an arm of USDA, set out a new experiment designed to help slow the spread of this invasive beetle and to stem large expected losses to New Hampshire’s forestry industry.

EAB probably arrived in the United States on solid wood packing material carried in cargo ships or airplanes originating in its native Asia and has been working its way East. It was discovered in NH in Spring of 2013, in an ash tree along a city street in Concord. It’s not yet known to be in Maine or Rhode Island, but it’s in all states south and east of us and in Canadian provinces to the north. http://www.emeraldashborer.info.

Last summer, Bill Davidson of the New Hampshire Department of Resources and Economic Development (NHDRED) began work mapping the spread of the infection in New Hampshire and introducing parasitic wasps that eat the EAB larvae, with the hope that they will eventually slow the spread of the infection. When Bill arrived, he, had just finished his master’s degree in entomology, with a research focus on EAB. He explained that the wasps would not reproduce fast enough to stop our ash trees dying here at Riverland, but when the EAB had exhausted their food supply, the wasp would hopefully go with them when they colonized new stands of ash, and would slow their growth in the new location.

He released the wasps, otherwise known as biological controls, into the canopy of the ash trees, with the hope they would breed and find the EAB, their host. These wasps are tiny and cannot sting people and are thought to have no other impact on our habitat. He reported briefly this spring that he thought they had established themselves; he planned a second release this summer to reinforce this nascent population.

Theresa and Marci, who work with Juli Gould in the APHIS office in Buzzards Bay on Cape Cod, explained that they are experimenting with three kinds of wasps to see which are more effective in controlling EAB and just how they work. The three are tetrasticus, affectionately known as “tets,” Spathius, also known as “spats”, and oobius. Tets and spats infect the larvae and oobius infects the EAB eggs.

According to Theresa, each EAB can lay 100 eggs and that they must kill 99 percent of the larvae to get an infection under control. Those are tall odds, which is why they expect the infection to keep spreading for the foreseeable future. 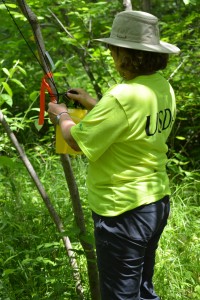 They are setting out sticky yellow cards on small, medium, and large ash trees, at both the top and bottom of the trees, to see where the “tets” wasps fly in search of EAB larvae. In previous experiments in Michigan, the wasps have flown to the canopy of the trees; in New York, they did not. The team suspects that the wasps look for EAB larvae under thinner bark, say in saplings or in the new growth at the tops of the trees. They will also be looking to see whether the oobius wasps are killing the EAB eggs.

Today, they were shooting lines into the trees with a big sling shot to which they will rig the cards. Technicians from the University of New Hampshire will come weekly during the summer to set out clean sticky cards and take the old ones back to their lab for inspection. The New Hampshire Technical Institute (NHTI) will host a similar experiment. Theresa said Riverland and NHTI were chosen because they each had a moderate EAB infection, small, middle and large ash trees in close proximity to each other, and a landowner willing to give permission. 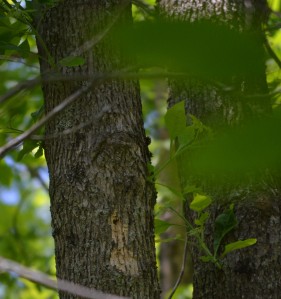 Signs of an EAB infection include “blonding” on the bark (a light-colored patch), often with woodpecker holes where the birds have drilled into the bark to eat the larvae. As the trees become stressed, the leaves in the canopy become patchy and the tree compensates by sprouting leaves straight from the trunk. For more on signs and symptoms of EAB, click here.

To report a suspected EAB infection in New Hampshire,click here.

Theresa said the EAB could devastate the ash population in New Hampshire. “I don’t want to lose more forest or species,” she said. “I want it to be here for the next generation of people.” If we learn more about the basic biology, we will know better about where and when to release biocontrols next time.

Ash comprises an estimated 6 percent of New Hampshire’s northern hardwood forests or about 25 million trees. It accounts for about 2.6 million board feet of the 223 million board feet of wood harvested annually in New Hampshire, according to Brad Simpkins, state forester. The ash species accounts for an estimated $500,000 paid annually in stumpage fees to New Hampshire landowners and $1.15 million annual to lumber mills. These figures are from a 2013 article found here.

According to a 2013 Eagle Tribune article, Karen Bennett, a UNH Cooperative Extension Forestry Specialist, said it could cost $25 million to replace the thousands of ash trees found along city streets. She further estimated that the loss of the ash population could cost $1 million per year to industries that use ash, typically in cabinetry and flooring. Firewood sellers could lose another $500,000 per year. Click here to learn more.

Experts say moving firewood from place to place is driving the rapid spread of this invasive species. The state has quarantined the movement of all ash trees, nursery stock, and hardwood firewood in Belknap, Hillsborough, Merrimack and Rockingham counties. For more information, go here.